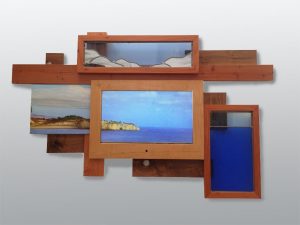 Multimedia artist Jesse Miller is a favorite of ours not only professionally but personally. Jesse works in every imaginable form of media and medium, such as clothing, posters, cd covers, chalk, commercial logos, paintings, murals, surfboards, wood carving, and leaded glass, just to name a few. For the last decade his creativity has been finding it’s way onto canvas. His ideas have exploded off the canvas as they sprawl effortlessly through hand carved wood and leaded glass.The son of a woodworker, Jesse proves that artistic craftsmanship runs in the family. He grew up in Costa Mesa, California where he developed his eclectic, 7O’s surf style influences. Jesse’s client list includes the top surf companies of all time such as Quicksilver, Billabong, and Gotcha to name a few.

In 1994 he launched Green Sun, a project that is still very well respected with the locals and counter culture underground.

Most summers, you can find Jesse at his handcrafted booth at the legendary Sawdust Art & Craft Festival, dedicated to educating the public and promoting the art created in Laguna Beach, and celebrating and supporting the work of local artists.

You can now find a few of his fine art pieces available on our new fine arts page as well as link up with Jesse directly for custom pieces via links below.

Jesse Miller can be contacted at:
jmillerart@hotmail.com,